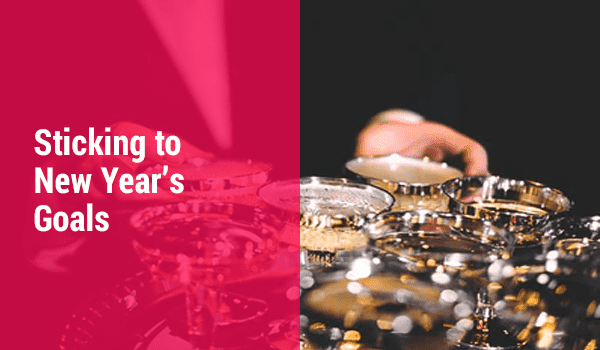 Science has proven that micro-habits are much more effective than big, hairy goals. And yet, when another New Year’s rolls around, the first thing we do is make a huge list of resolutions we want to keep. However, using micro-habits to make changes in your life sets you up for success because of the consistent progress you see. Sticking to our New Year’s goals this year doesn’t need to be hard or scary. Try these four easy strategies to make your goals for the new year doable and rewarding.

1. Choose One Thing—one reason we rarely accomplish any of our New Year’s resolutions is because we make a lot of them and they are all massive. So, this year, instead of a laundry list of changes, decide which goal is the most significant in your life. For example, since our health impacts everything we do, you may decide that getting healthier is the one area which deserves your focus.
2. Break It Down—another way we make things hard for ourselves is by stating our goal as something ambiguous and undefined. Like in the example above, “Get healthy” as a goal is sure to fail. Why? You'll fail because the goal is too vague. Instead, you may want to start a list of all the steps you could take to become healthier. You could include things like drinking eight glasses of water per day, exercising for twenty minutes each day, eating a salad for lunch five days a week, drinking only two cups of coffee or soda per day, and getting at least eight hours of sleep per day. Then, choose just one of those to start. Starting with the easiest one is okay. Once that becomes a habit, you can move on to the next one on the list.

Another important aspect is to make the action toward your goal doable. If drinking eight glasses of water each day sounds impossible, how about drinking two? Once you’ve reached two glasses each day, you can step it up to three. That’s how we make even challenging goals stick.

3. Choose a Prompt—the easiest way to make sure you include the action steps you need to take to meet your goal is by taking them immediately after you do something that you already do each day. For example, if your goal is to drink eight glasses of water per day, choose prompts to help you remember to drink water. Maybe you decide to take three big gulps of water after hitting “send” on each email throughout the day or a whole glass before each meal and on each break you take during the day.
4. Connect it to a Positive Feeling—how do you feel at the end of the day when you stay hydrated? Sure, you might not enjoy drinking water all day, but by connecting the action to still having lots of energy after you’ve worked all day, for example, it’s easier to get up and do the same thing again the next day too. Before you know it, drinking enough water each day has become a positive habit—a goal you’ve reached. Once that’s in place, you’ll be ready to take on one of the others on your “Get healthy” list.

About the author
Sri Budi D

Recent posts
How to Start Selling Printables Online Using PLR
How to Generate Affiliate Sales with No Website or Money!
By Sri Budi D
Give these products away to make money?
By Sri Budi D
4 Easy Strategies for Sticking to New Year’s Goals
By Sri Budi D